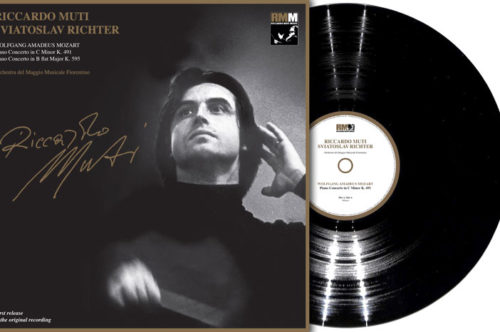 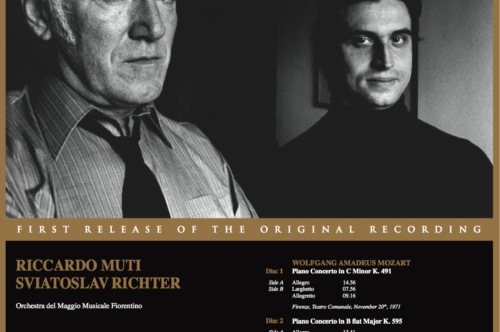 Hand-signed by Riccardo Muti only on riccardomutimusic.com

With every purchase of the Vinyl, you will get the CD version for free.

Subscribe to our free newsletter: besides receiving information about the latest news and events of Riccardo Muti, you will get a further 10% discount on your first order.

Triumphal conclusion at Teatro Comunale
Success for Muti and Richter

[…] the perfect inner assonance emerged between Muti and Richter many years ago was even more touchingly confirmed during these concerts: the great Russian pianist imprinted on the pages of Mozart’s masterpiece all their sorrowful candor, all the gleam of a lyricism of unrivaled fantastic richness. Muti flanked the outstanding interpreter recreating the mysterious and unutterable “scene” used by Mozart to establish the dialogue between soloist and orchestra.  Thus emerged the bow in K 595 in its entire poetic charge, as if orchestra and piano were parts of a unique instrument; so that we wouldn’t know whom to admire more, whether Richter or Muti […]
(Free translation from the original in Italian)
Leonardo Pinzauti, La Nazione, December 6, 1976

By the 1970s, when these recordings were made, Sviatoslav Richter had been reigning as an international titan of the keyboard for two decades. A People’s Artist of the Russian Soviet Federative Socialist Republic adored by audiences everywhere, he also stood aloof, keeping his personal life to himself, vanishing from the rat race of the music “business” for whole months at a time. Only at the very end did he open up to Bruno Monsaingeon, a filmmaker who specializes in documentaries on music and musicians. Heart on his sleeve, Monsaingeon assigns each such labor of love an opus number, the way a composer would. A Frenchman sensitive to the shadings of many languages, including Russian, he has given the title of his Richter portrait, op. 58, a different nuance in each of his major markets. In French, it’s Richter l’insoumis (“The Rebel”); in German; it’s Richter der Unbeugsame (“The Unbending”); for the artist’s compatriots, it’s Ри́хтер непокоренный (“Unconquered”). In English, it’s Richter the Enigma, likely the most fitting of all.

When Richter met Muti for the concerts preserved here, Muti’s meteoric trajectory was just beginning. I’ve heard the conductor reminisce about their partnership many times; and as I remember the story, Muti felt hesitant, so early in his career, to approach so towering an artist. But Richter had no qualms. “If you are a serious musician, why not?” (I quote from memory.) They went on to collaborate on several occasions, on international concert stages as well as in the recording studio.

As documented in the live performance of K. 491 from 1971, the two artists shared an instant, instinctive, and inspired rapport that elevated every orchestra player, too. The music they make is as thoughtful as it is transparent, Olympian yet never ponderous or constrained. As in the architecture of Palladio, structures are spacious and in perfect balance, yet alive with the imponderable play of ambient light and shadow. When the maestro and the titan reunited for K. 595 in 1976, the ovation was rewarded with an encore of the finale, which is the version we played on the air. Sublime.